Marienhåb, Kirkegårdsgade 3, Aalborg, was built in 1808, two years after the church of Almenkirkegården. Marienhaab lay far beyond the city boundary on a site where St. Jørgensgård had previously been. The farm belonged to St. Jorgen’s Church, which lay about 200 m away. St. Jørgens Kirke was used as a krudtmagasin after the church was closed in 1790 and until 1807 where the church was demolished. 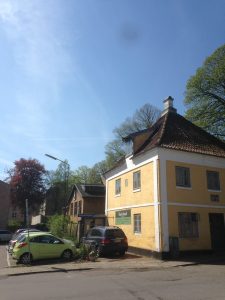 The materials from the church were allegedly recycled, partly a new chapel which had later been demolished and to Marienhåb, which was designed as a tractor site for visitors to the cemetery.

To the site originally belonged a cone runway parallel to the cemetery to the south. The bowling alley takes place On city maps from 1847 and can explain the very long, narrow design of the matricula. The story also tells that the guests of the funeral companies often got a little enough in the west so the cone of the game disturbed the mourners in the cemetery.

When the building was completed in 1807, it had yellow-colored walls as today, but with cornices and pilasters in red bricks and not today with white painted cornices. The tractor site was decorated on the ground floor, while the 1st floor was used for living and kitchen. In the southwest corner, a serving staircase created a direct connection between the tractor site in the living room and the kitchen on the first floor.

Originally there was a grocery store next to Marienhåb. This building was very close, and there was only a very narrow passage between the two buildings.

At the end of the 19th century, a stable building was built at the southern end of the ground, but as the passage was very narrow, he would have cut an approx. 10 cm deep groove in Marienhåb’s east-facing outer wall to get through the wagon. A fuge is still visible on the eastern facade of the building, which allegedly originated from here. The merchant’s building to the east disappeared in the star of the 1960s.

Marienhåb’s first owner went bankrupt, and in 1861 Lars Nielsen took over the property. Marienhaab remained in genera for several generations in Lars Nielsen’s family until 1983, where Birgitte Rode, the current owner, took possession of the building. In 1920, grandchildren Anine Madsen and Anine’s blind sister Marienhaab inherited. Anine had to promise not to marry so she could take care of her blind sister. Already in 1931 Anine built and decorated a small bakery in the long south-eastern junction, from which she sold her famous biscuits to the whole of North Jutland, Anine Larsen Småkager. To Anine’s hero, the blind sister gets married and then Anine Madsen gets married to state-licensed church painter Johannes Th. Madsen, who later built the backyard yellow studio building in 2 stages in 1941 0g 1946. 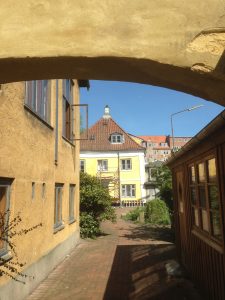 In 1983, the present owner, Birgitte Rode, moved into the building and established an artist collective act. Subsequently, the extension and the courtyard have formed a framework

The soundtrack Kling Klang, how many North Jutlandians have had a festive experience for recording songs to Polterabends and small concerts.

Today, Marienhaab’s activities have expanded and we are proud to present our sales of Danish Design, Vintage and Antique.

Welcome to Marienhaab’s websiteThe soundtrack Kling Klang, how many North Jutlandians have had a festive experience for recording songs to Polterabends and small concerts.

Today, Marienhaab’s activities have expanded and we are proud to present our sales of Danish Design, Vintage and Antique.